For grandparents, and everyone concerned to leave a liveable planet to our children, children's children and future generations.

Rebelling against injustice is sometimes seen as the prerogative of the young, so the voices of older people involved in climate activism can carry particular weight in communicating the crisis we face and standing in solidarity with younger generations. Below are details of two groups: Grandparents Climate Action, based in Oxford, and Grandparents for a Safe Earth, based in Bristol. The start of a national network, we hope!

Nancy Lindisfarne writes below about how a visit to Norway inspired her to set up Grandparents Climate Action in the UK. Based in Oxford, the group took part in the recent joint rally calling on Oxford University and Oxfordshire City Council to divest from fossil fuels.

To contact the campaign: phone Nancy - 01865 722 978 or email grandparentsclimateaction@gmail.com

Check out the latest actions they've been part of.

Recently in Oslo  I met with Mette Newth, and Finn Bjørnar Lund to learn about the Norwegian Grandparents’ Climate Campaign. They are both activists with ‘fire souls’, as Norwegians say. They couldn’t have been more helpful and encouraging about setting up such a network in the UK. There are already similar campaigns like  the great ‘Knitting Nannies’ in Australia, the ‘Grey Panthers’ and ‘Our Children’s Trust’ in Sweden, and the very active ‘For Our Grandchildren’ in Canada. 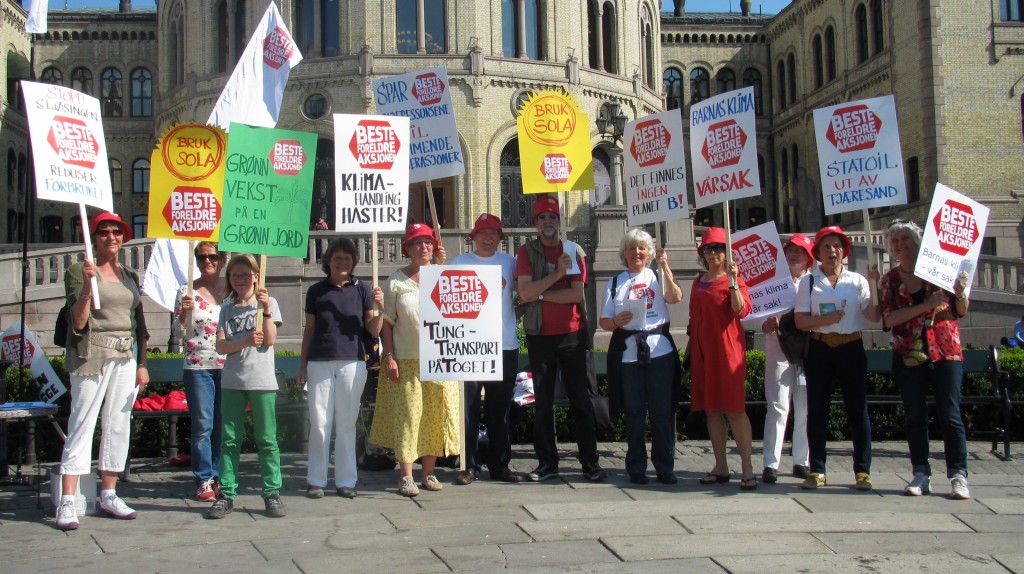 The common thread is ‘intergenerational justice’, James Hansen’s telling phrase. His book Storms of My Grandchildren: The truth about the Coming Climate Catastrophe and Our Last Chance to Save Humanity (2011) has been important to the Norwegian campaign.

The aim of the Grandparent’s campaign is to secure the planet for coming generations – for people as yet unborn, for people we will never meet – by reducing our use of fossil fuels and converting to renewables as fast as possible. ‘It’s a conservative campaign, not revolutionary at all’, Mette said, somewhat tongue in cheek. ‘It’s about conserving and protecting and preserving our planet from further desecration.’

The Grandparents’ campaign has proved an important catalyst for the Norwegian climate campaigning across the board about the use of national oil resources, church disinvestment and so on. The Grandparents’ have organized marches, torchlight vigils, lecture tours, and worked with schools and youth organizations. Their stance during what they called the national ‘climate election’ of 2013 eschewed connection with any particular political party, while encouraging people throughout the country to ‘Vote for the Climate’. The result is a much wider understanding of climate change. And the Grandparents’ concerns are global: much to the annoyance of the Canadian government, they added their voice to the First Nation activists fighting to stop the rape of the Canadian tar sands,

The Grandparents’ campaign began in 2006 as a membership organization. Then now have 2000 supporters, and regional groups in Norway. They include a number of authors, concerned scientists, politicians, celebs, who speak out and march, not as poster-people for the campaign, but as grandparents.

As Mette described it, from the outset thecampaign has been ‘lean, small and nomadic’. This has helped them to be completely independent, which gives them a powerful voice – ‘Who can gainsay grandparents?’ Mette asks. Members pay a modest 10 Kr. annual dues. They have a website, but no office. They have asked for, and received, cooperation from the other much bigger environmental NGOs (such as Greenpeace, WWF) for office support, copying, and the like for which the Grandparents swap favours and are generous with their time, energy, and I imagine their wisdom. Nationally, they use their website and emails. The committee of 50, and the steering group of 10, expect to do their own work and, for example, stuff the envelopes for the mail-outs for people who don’t use the internet. Meanwhile, local groups decide what local campaigns to join.

The dangers of starting a new organization, Mette and Finn Bjørnar warned, are standing still, being satisfied with too little, and worrying too much what others might think. Their strengths, they felt, were that they are a generous organization, and encourage the widest variety of activities. And their greatest strength, is that they are acting out of love, for children and grandchildren everywhere, and they have more time, and sometimes more money than others, and they have little to risk and everything in the world to fight for.

Latest actions Grandparents Climate Action have been part of:

The impressive Oxford divestment campaign organized a March for a Fossil Free Future, in Oxford, 31st May, 2014. Several hundred people marched through the city, including supporters of Grandparents Climate Action with their new posters, which delighted everyone. At the rally, Grandparents Climate Action was introduced as a campaign mobilized by love: love for all the children, and children's children to come, love for the planet and a fierce love that to help us fight for a carbon free future. 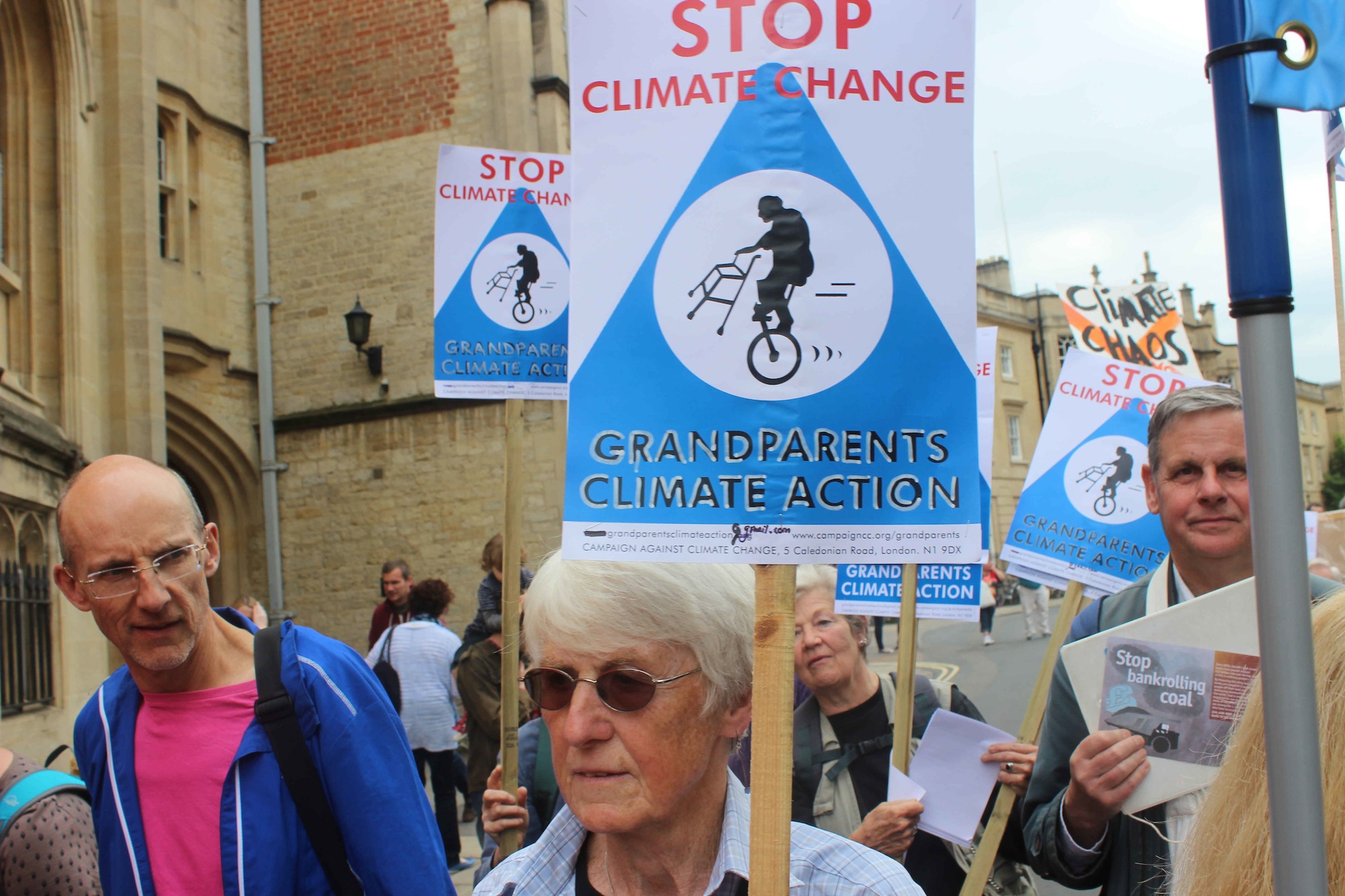 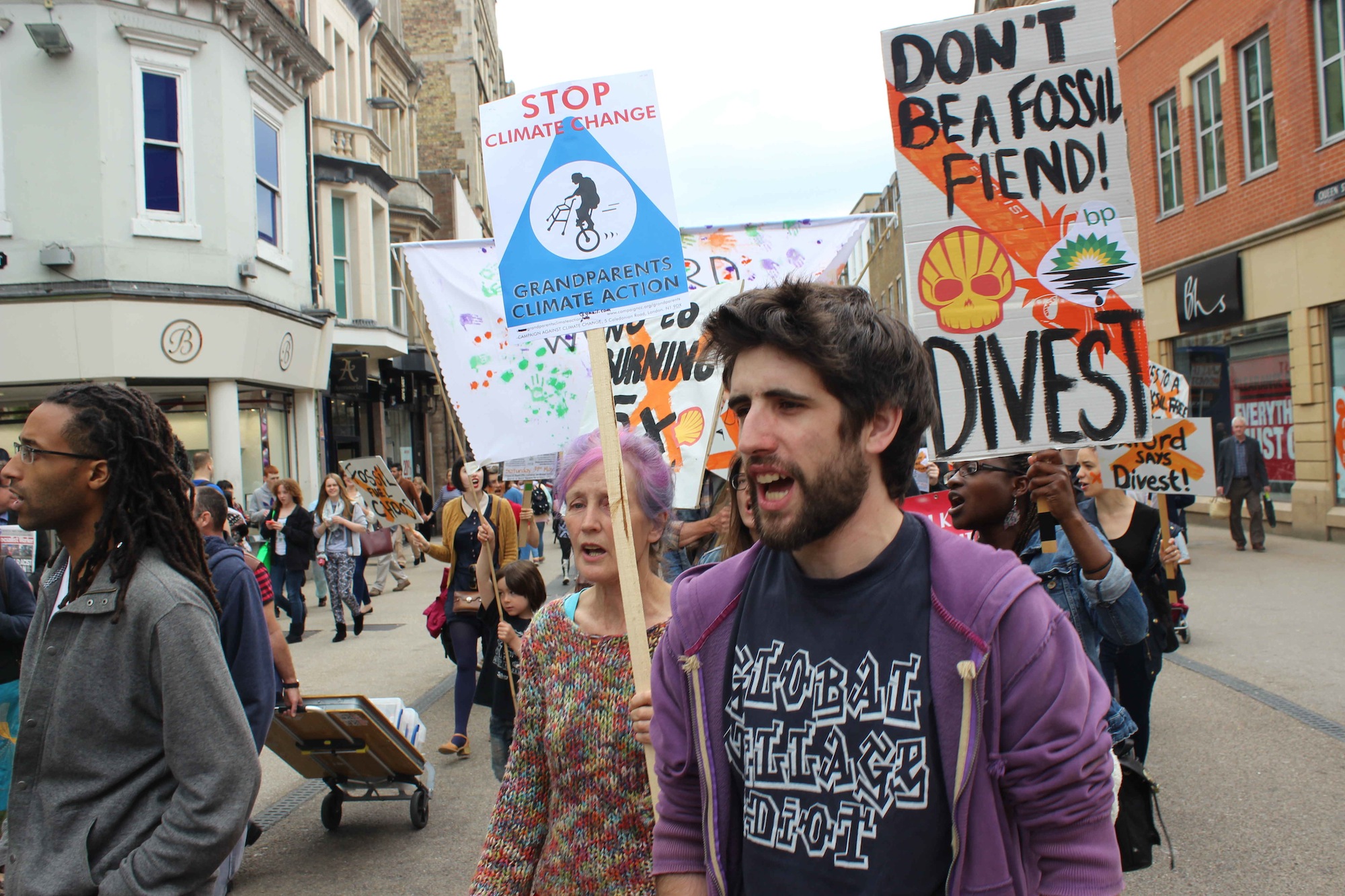 On the 10th July Grandparents Climate Action organized an Afternoon Tea in Oxford. Some twenty-five grandparents and supporters brought cakes, toys and ideas about how to take the campaign forward as sat in the splendid garden of the Friends Meeting House in St. Giles. 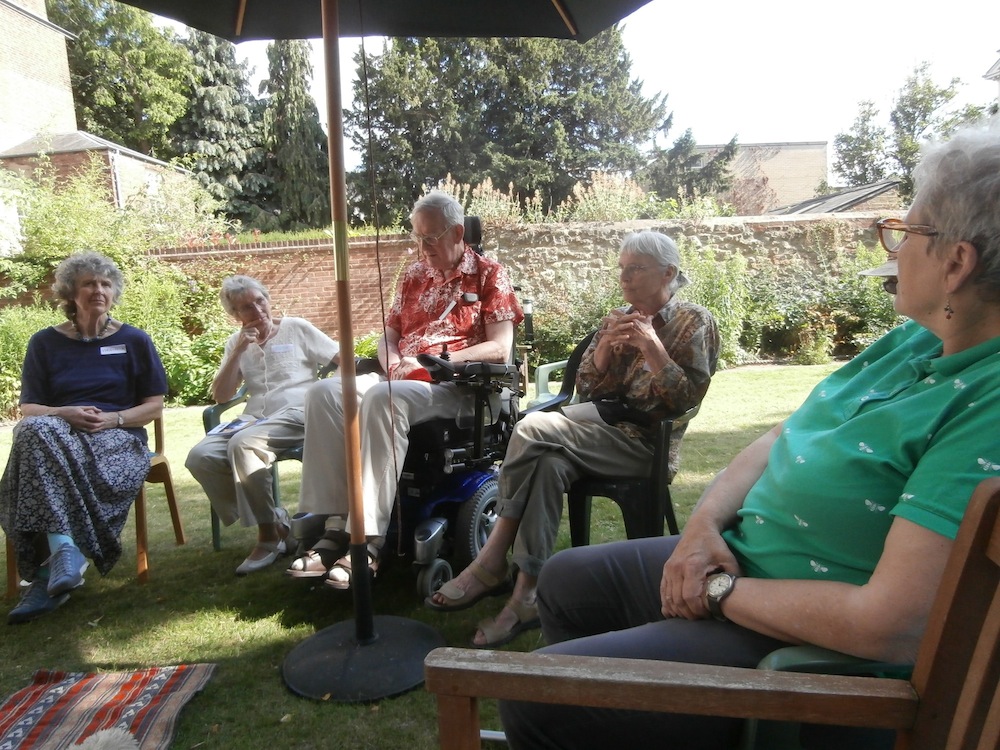 Grandparents for a Safe Earth

Another group concerned with intergenerational solidarity are Grandparents for a Safe Earth, based in Bristol. Check out their website and get in touch.