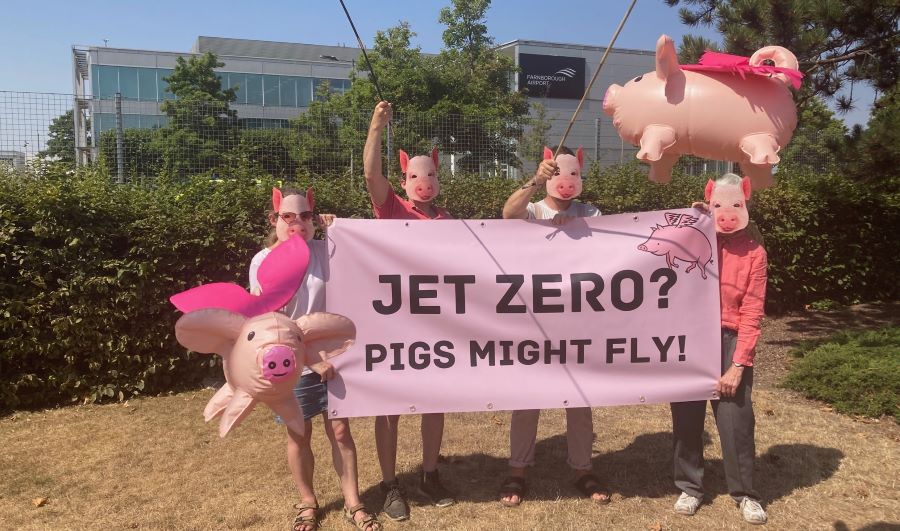 Many people won't have heard of the government's 'Jet Zero' strategy. But if you've seen breathless headlines promising breakthroughs in low carbon aviation - "Solar flight!", "Planes powered by used cooking oil!", "Hydrogen fuel!" - and other headlines about airport expansion plans, then you might have a clue. The strategy is based on unchecked aviation growth and the hope that future technology advances will bail us out after that. It completely ignores the evidence that the emissions cuts delivered will be far too little, far too late, as well as the advice of the Committee on Climate Change, which has repeatedly said that air travel should not be expanded without effective progress on cutting aviation carbon emissions.

On the hottest day ever experienced in the UK, during a lethal heatwave sweeping across Europe, the government launched 'Jet Zero' at Farnborough International Airshow. Giving a green light to airport expansions and a huge increase in passenger numbers (rising by 70% by 2050 compared to 2018), and relying on pie in the sky techno-fixes, it pours fuel on the fire of climate breakdown. In this video, campaigners from Campaign against Climate Change, Stay Grounded, Safe Landing, and local airport campaigns explain why the Jet Zero strategy is worse than useless. You can read more about the problems with techno-fixes below, and more detailed analysis of Jet Zero by Carbon Brief.

The elephant in the room - aviation's climate impact tripled

When we see aeroplanes flying overhead, they leave behind contrails. This emission water vapour, nitrogen oxides and particulates at high altitude creates an a ‘blanket’ warming the planet, in addition to the long term addition of CO2 to the atmosphere. The best current estimates are that non-CO2 emissions triple the heating impact of aviation compared to CO2 alone. And yet almost all policy decisions on aviation expansion are taken without acknowledging flying's real climate footprint.

Even in the UK. access to flying is hugely unequal. Just 15% of frequent flyers take 70% of all the flights, and in a typical year nearly half of us don’t fly at all. Aviation gets a huge tax break because its fuel is not taxed, so making flying artificially cheap compared with more sustainable transport. Proposed measures to redress the balance like a frequent flyer levy have wide public support.

When looked at internationally, the disparity is even more stark. An estimated 2-4% of the world's population took an international flight in 2018 while 80% have never set foot on a plane. A return flight between Paris and New York emits three times as much carbon as the entire annual emissions of an average person in Uganda - and of course the latter is much more vulnerable to the deadly impacts of climate breakdown as a wealthy jet-setter. (More about climate injustice and flying)

In late 2019 Bristol Airport submitted plans for a major expansion programme to increase passenger numbers from around 9 million to 12 million each year by 2025. Following widespread local protests, and a consultation with 8,473 objections to expansion, North Somerset councillors voted to reject the Airport’s application to expand, by 18 votes to 2, and 3 abstentions. This decision was supported by local MPs, Bristol and Bath City Councils, the main Town Councils in the region and the majority of Parish Councils.

However when the airport appealed, planning inspectors overruled the decision, allowing the expansion to proceed as originally recommended by the council's officers. This is not just 'one bad decision' - it shows that current planning law and guidance is completely inadequate to deal with a climate emergency. National policies set by the government make it very difficult for local decision-makers to stand up against high-carbon projects that local people have rejected.

The get-out-of-jail-free clause is that any individual project, no matter how polluting, will not in itself make it impossible to stay within the UK’s carbon budget. But of course the combination of all these new roads, airport expansions and fossil fuel exploration cannot possibly be compatible with our climate commitments. And the wider context, as set out above, is that government policy actually supports airport expansion

The problems with techno-fixes

In short, all of them are either extremely expensive, close to physically impossible, demand a ridiculous share of the planet’s limited resources, and/or wouldn’t actually reduce emissions.

Electric batteries: The weight of batteries compared to fuel makes it implausible, even with technological advanes, that in the next few decades they will be able to power aircraft with more than 10 passengers or for distances greater than about 1000km (less than a flight between Berlin and Marseille). Over 80% of aviation emissions are from flights over 1000km, and for shorter journeys, rail is the obvious alternative.

Hydrogen: To accommodate storage space for large volumes of hydrogen, aircraft will need to be completely redesigned. Even Airbus, who plan to invest in this technology, have admitted that hydrogen will not be widely used in aircraft before 2050. There are also technical and safety questions as yet unanswered. In addition there is the question of sourcing sufficient hydrogen. To be truly zero carbon, it must be made from water using renewable energy. Creating hydrogen in this way is much less energy efficient than direct electrification, so will require large quantities of renewable energy, and it will be needed for other industrial and transport uses, which arguably should be prioritised over flying.

E-fuels: Made from combining hydrogen with CO2, these are extremely inefficient to produce, if not dependent on capturing (and then re-releasing) CO2 from burning fossil fuels. They are also still at the pilot stage and several decades of heavy investment would be needed to scale up production.

Biofuels: There is very limited availability of biofuels which may be truly ‘sustainable’ e.g.  cooking oil, and much demand from road transport and other competing uses. Growing crops for biofuels has caused many serious problems, such as land grabs, deforestation and removing land from food cultivation. Despite the International Air Transport Organisation (IATA) aiming in 2009 for 10% biofuels by 2017, as of 2021, only 0.01% of jet fuel was biofuels.

Carbon offsetting: Problems with the technologies listed above mean that there would have to be heavy reliance on offsetting carbon, including to compensate for the two-thirds of aviation’s climate impact which is not caused by CO2 . There is a long history of evidence that offsetting through tree planting or forest protection is unreliable and has been linked to human rights and biodiversity damage. Engineering solutions such as removing CO2 from the atmosphere are similarly unproven.

You can find more information in our 2021 Jet Zero factsheet, and in greenwashing factsheets from Stay Grounded.

Campaign against Climate Change is a member of Stay Grounded, the international network for organisations and campaign groups aiming to to reduce air traffic and build a climate-just transport system.

List of planned airport expansions around the UK including those expanding 'by stealth'.