Climate change is the current rapid warming of the Earth's climate caused by human activity. If left unchecked (and current responses are doing little to halt it) it poses an unprecedented threat to human civilisation and the ecosystems on this planet.

What does it mean to say the climate is changing?

First, 'climate' is very different from 'weather'. Weather changes by the hour and, especially in the UK, naturally varies widely between years. We know the climate is changing because, averaged out over longer periods, the global mean temperature has been consistently rising, across land and sea. It is now about 0.8C above pre-industrial times. 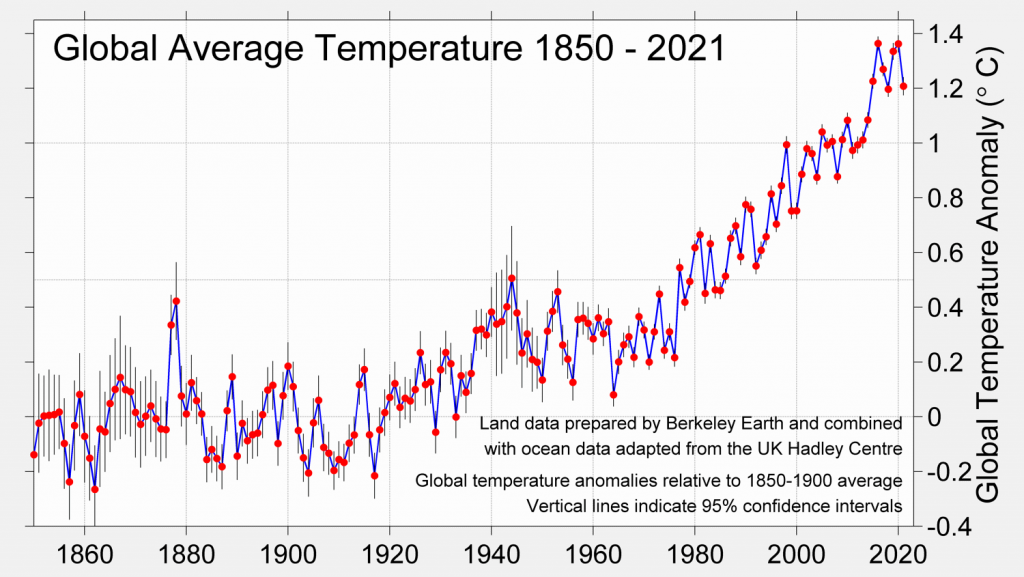 Climate Lab Book created an animated climate spiral, illustrating the increase in global temperatures from 1850 to the present.

The world has been experiencing changes in climates, affecting millions of lives. Already, there has been the bleaching of coral reefs, the sea ice volume in the Arctic has been reaching new lows, an increase in the number of natural disasters worldwide (such as wildifres, droughts, floods) and the mass migration of species. For more information, you can read more about the current effects of climate change here.

What is the greenhouse effect?

Certain gases in the Earth's atmosphere (water vapour, CO2, methane and others) allow sunlight to pass through, but then stop the heat from escaping back out into space - much like glass in a greenhouse. Without this, our planet would be uninhabitable to most forms of life. However, by changing the balance of gases in the atmosphere, humans have increased the greenhouse effect, causing the rising temperatures we now see.

Where do greenhouse gases come from?

As explained above, these gases exist naturally in our atmosphere. The most significant increases are in carbon dioxide (there is now over a third more CO2 in our atmosphere than there was before the industrial revolution) and methane. Methane is a more potent greenhouse gas, but it only remains in the atmosphere for about a decade. Carbon dioxide lasts for about 100 years or more, so even if we stopped emissions from human activities altogether, the planet would continue to warm up from the gases already emitted. The main causes of increased CO2 in the atmosphere are burning fossil fuels (coal, oil and gas), and the deforestation and other changes in land use that release stored CO2 and methane.

The graphs below, also known as the Keeling Curve, show CO2 levels over time. The first shows CO2 levels today and how they compare with the last 10,000 years. The second goes back much further - 800,000 years. 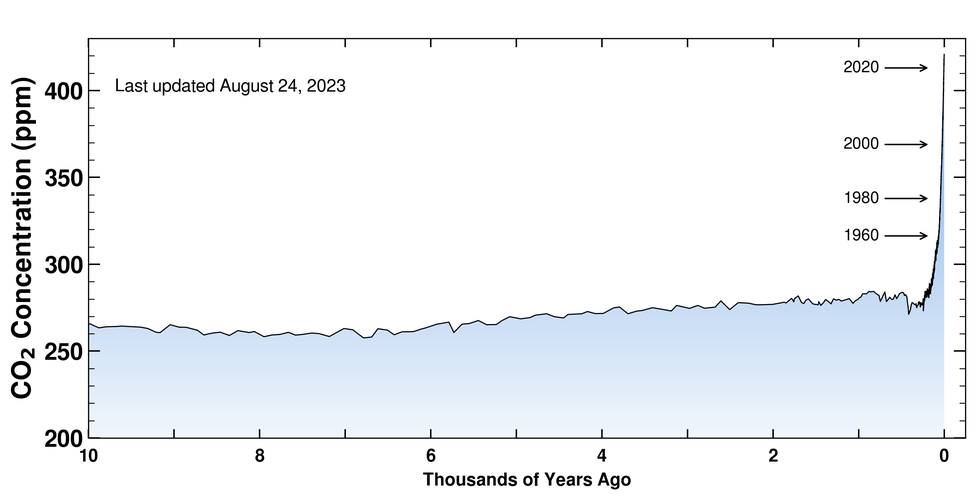 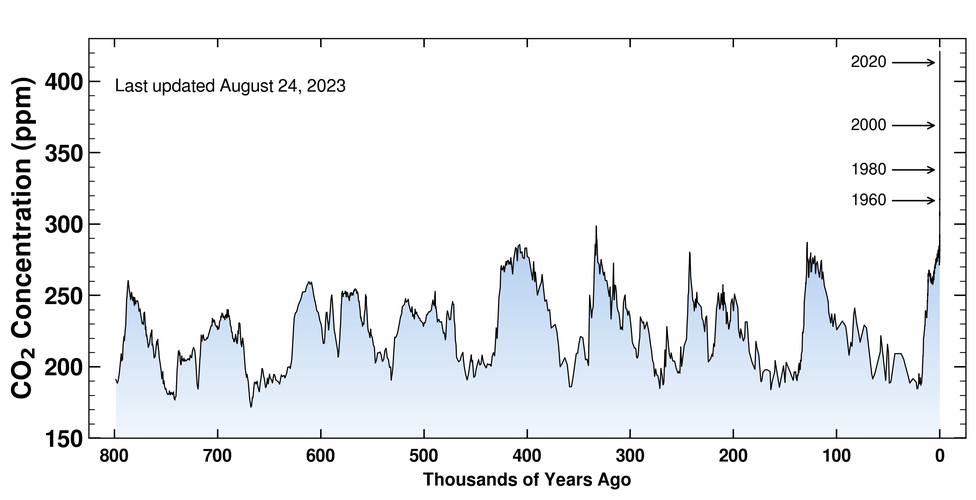 Is there any doubt about what's happening?

The idea of an urgent shift away from fossil fuels is not welcome to everyone, and those who seek to delay or prevent this have been very successful in spreading the idea that climate scientists are uncertain about climate change (or even fraudulent!). Unfortunately there is, as legal terminology has it, no 'reasonable doubt' about climate change.

Could the rise in atmospheric carbon be coming from somewhere else?

Humans are currently emitting around 30 billion tonnes of CO2 into the atmosphere every year. Of course, it could be coincidence that CO2 levels are rising so sharply at the same time so let's look at more evidence that we're responsible for the rise in CO2 levels:

How do we know that the extra CO2 in the atmosphere is warming the planet through the greenhouse effect?

(The above Q&A was taken from Skeptical Science, where you can read more about the evidence and find the answers to lots more questions like "Could the sun be causing it?" and "What about the Medieval warm period?")

What can we expect to happen next?

That depends on what we do now. Because of all the greenhouse gases already in the atmosphere, if the human race disappeared tomorrow, we'd still expect the planet to continue heating up. If we carry on emitting at the rate we are today, it will heat up much more rapidly. Rather than just warming, it makes more sense to think of it as the climate becoming more unstable, with extra energy in the system. Extreme weather events will become more common, ecosystems will be put under stress and so will human agriculture and water supplies. Some parts of the world are particularly vulnerable, such as sub-Saharan Africa, but no area will be immune.

The pledges that governments have made so far to cut emissions are not enough, even if they were achieved. So far global greenhouse gas emissions show no sign of falling.

The Intergovernmental Panel on Climate Change (IPCC) brings together and reviews all the scientific evidence on climate change. The IPCC's landmark report in 2018 highlighted the massive increase in loss and damage to the natural world and to humanity if temperatures rise up to 2 degrees on average above pre-industrial temperatures, compared to 1.5C. Even a rise of temperatures by 1.5C would cause devastating impacts, such as the loss of the majority of the world's coral reefs.

The IPCC's update on the physical science of climate change in August 2021 said that keeping to that 1.5C was not yet impossible. But it will require “immediate, rapid and large-scale reductions” in emissions. Even cutting emissions, but more slowly, leads to 2C and significantly more suffering for all life on Earth.If emissions do not fall in the next couple of decades, then 3C of heating looks likely – a catastrophe. And if emissions don’t fall at all, then we are on track for 4C to 5C, which is a terrifying prospect.

Join us to take action