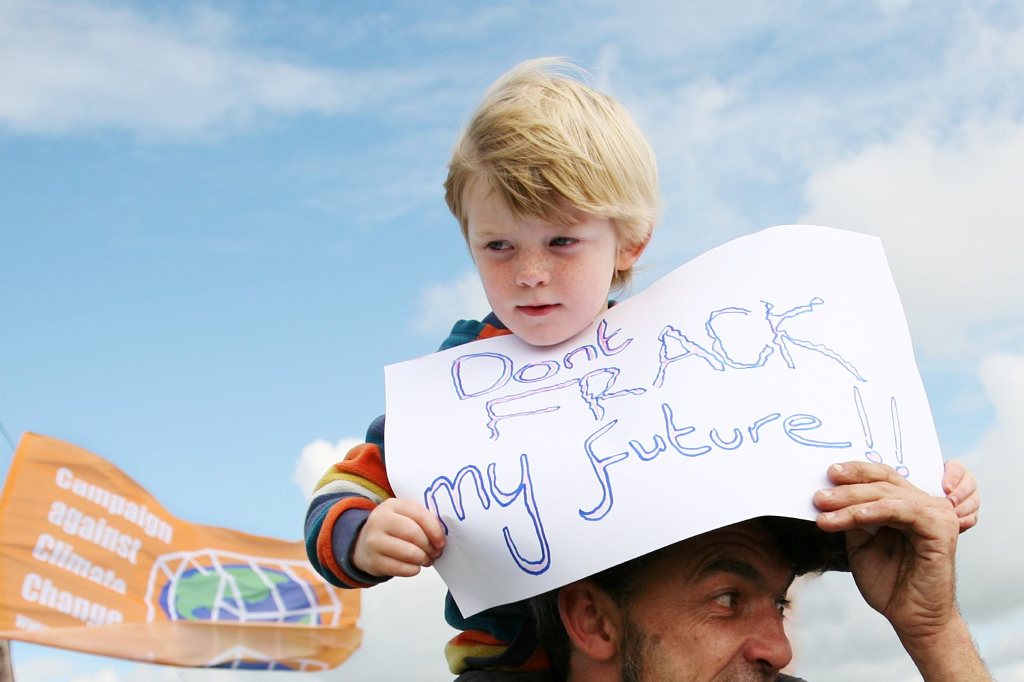 There is currently a 'review' into the geological science around fracking (in other words, the risk of triggering earthquakes). We do not expect this to reopen fracking in the UK but will be ready to act if it does.

It's important to note that because of a narrow legal definition of hydraulic fracturing / fracking in UK regulations, dependent on the volume of fluid used, it has still been allowed at some sites and local campaigns continue, despite the moratorium which has been in place since 2019. Drill or Drop is a useful resource for news about these sites.

The Committee on Climate Change has concluded that exploiting shale gas by fracking on a significant scale is not compatible with UK climate targets unless three tests are met. Read more about why we believe not only that the tests will not be met, but also that the government is not even taking them seriously. Fracking and climate factsheet.

A bridge to nowhere

Fracking (hydraulic fracturing) is a means of extracting natural gas from shale rock by pumping water in at high pressure. It has been responsible for serious local pollution, including poisoning drinking water supplies, in the US.

It has been argued that as a lower-carbon fuel than coal, shale gas can act as a 'bridge' to low-carbon power, allowing more time for renewable energy to become more efficient. However, the counter-argument is that developing fossil fuels makes it more difficult to switch from a high-carbon future to a low-carbon one.

The UK’s commitment to making our fair contribution to reduce emissions in line with keeping global warming below a 2°C rise gives a very clear global carbon budget – and hence a UK budget – i.e., how much carbon we can put into the atmosphere over this century. Here the maths is unambiguous – we have insufficient budget for the carbon we are already emitting. By the time shale gas is produced in any quantity (five to ten years) there will be no emissions space left for it.

In the absence of a stringent limit on total carbon emissions shale gas will not substitute for coal - certainly not on a global level.

The US has seen an increase in the release of methane gas as a direct result of fracking. This is important because methane is a far more potent greenhouse gas than CO2. Substituting gas for coal only benefits the climate if leakage can be kept below 2%. Evidence on methane emissions from fracking in the US suggests it is significantly higher than this. The Scottish government has released a series of reports highlighting the damages, and risks, of fracking. The Scottish Parliament voted supporting an outright ban on fracking earlier this year.

A new report by Talk Fracking has come out detailing how Whitehall's push for fracking is based on reports and studies that have misled Parliament and understated the impact of fracking. Examples of flaws in those papers include:

The report shows how the policy decisions on fracking that have been made are based on misleading reports and statistics, which has led to the government continuing to push fracking. The report concludes with the recommendation that the government immediately reviews the policies on unconventional shale gas and oil, as well as the studies and reports used, such as the Mackay-Stone report and the Allen Study.

For local and national fracking news, check out Frack Off and Drill or Drop. You can also visit our page explaining why trade unions oppose fracking.